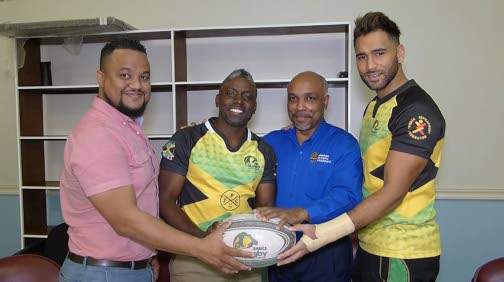 As they set out on the final leg of their Olympic journey, the Jamaica Football Rugby Union (JFRU) is expressing appreciation for the relentless support provided by the Jamaica Olympic Association (JOA).

Sports’ apex body, the JOA, had outlined a goal of attaining higher than normal sporting variety and qualification to the Olympic Games in Tokyo, in its ’10 in 20′ plan. So far, track and field, boxing, gymnastics, aquatics (diving), and swimming have made the mark.

For rugby, both Jamaica’s national men’s and women’s teams — the Reggae Crocs and Lady Crocs — will be participating in the Olympic Repechage, which will decide the final qualifiers for the Tokyo Olympics.

The teams’ quest for Olympic participation started several years ago and included funding from the country’s apex body for sport, the JOA, to prepare and participate in a number of tournaments, such as the 2017 Rugby America’s North Sevens, where Jamaica’s Reggae Crocs emerged champions and the Lady Crocs placed third. That victory launched Jamaica into the 2018 Rugby World Cup Sevens in San Francisco, United States, the Central American and Caribbean Games, Commonwealth Games, and Hong Kong Sevens.

Commenting on the long-running support provided by the JOA, Jerry Benzwick, chairman of the JFRU, said: “Being a member association of the Jamaica Olympic Association has some wonderful benefits, and being in an Olympic qualification hunt affords us good support from the Jamaica Olympic Association.https://bd4514ea40099de711820bd1be2e5a93.safeframe.googlesyndication.com/safeframe/1-0-38/html/container.html

“This is a wonderful initiative from the JOA that allows member unions to access funds and for this Repechage, access to these funds has been given to us by the JOA, and without that support I can tell you, our team would not have the funding to cover the expense of the preparations,” Benzwick said.

“We are extremely happy with the progress of rubgy under Mr Benzwick and his team. The sport has seen tremendous growth and has increased their regional and international presence in the sport,” said Foster.null

“The JOA will continue to provide avenues for our members, such as the JRFU, to find avenues to self-actualise and the Olympics is just one such avenue,” he added.

“Under our Olympic Invest programme we have committed already over $40m to our members for which track and field, surfing, judo, skateboarding, karate, wrestling, gymnastics, fencing, boxing, aquatics, table tennis, and rugby have all benefited thus far,” Foster highlighted.

Rugby’s final qualification tournament will take place on June 19-20 in Monaco, featuring 12 women’s and 10 men’s teams. The teams represent each of World Rugby’s six regions and this tournament is their final chance to qualify for the Olympics.null

In the men’s category, where two will qualify for the Olympics, Jamaica is drawn in Pool B, playing alongside France, Hong Kong, Chile, and Uganda.

Pool A comprises Samoa, Ireland, Tonga, Zimbabwe, and Mexico for a tournament format in which each team will play all opponents in its pool, with the top two progressing to the knockout stages. Pool winners will face the runners-up from the corresponding pool to book their ticket to the final and Tokyo.

For the women’s Olympic Repechage, the Lady Crocs also drew a spot in Pool B, where they will go up against Papau New Guinea, Kazakhstan, and Tunisia. Pool A comprises Russia, Argentina, Mexico, and Samoa, while Pool C consists of France, Hong Kong, Colombia, and Madagascar.

The top two teams in each pool, plus the two third-placed teams with the highest point totals, will qualify for the knockout stages of the competition. As there are two Olympic qualification places available for women, the Repechage will feature two rounds of knockout games with the final round featuring four teams competing in two matches, where both winners gain Olympic qualification and claim their tickets to Tokyo.

Benzwick said while the teams did not prepare adequately, owing to COVID-19 and not being granted approval to play or practise, the teams are working overtime to catch up, and he believes they will do well in the Repechage.null

“The girls are working hard, they are pushing themselves, and our boys are having a good go at it to get themselves ready. So regardless of the setback and all the obstacles, we think we are going to pull off a really good performance in this tournament,” he shared.

“I think our players have the spirit of crocodiles — they are resilient, they are tough, they are patient and they are hard-working. So, they are thriving off their own energy right now, and I’m watching them face adversity, watching them adapt, learn to be adaptive and accepting, and just living the moment.”

Continuing, Benzwick said: “I think that is very important for the success of any team. If you can seize the moment, it will always be the best team on the day that wins and the hungrier team. Mind you, fitness and experience and all the other attributes of being a sports person comes into play, but sometimes it comes down to just grit and determination, and that is something that the Crocs are not short of.”null

The Jamaica teams have been involved in a pre-tournament camp and will have another in Monaco prior to the Repechage. Benzwick again lauded the JOA for the support to boost its preparation and Olympic hopes.

“We have been afforded a rare opportunity to host an actual camp before we go to the Repechage and this has made a world of difference so far,” said Benzwick. “So we are truly grateful.”