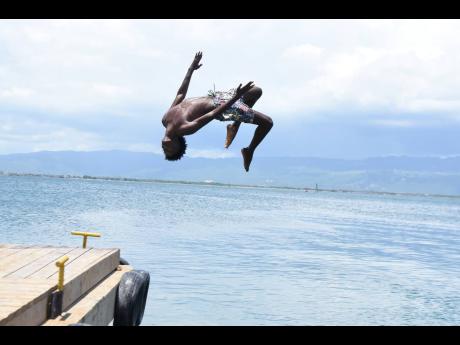 A group of teenage boys who recently expressed a desire to represent Jamaica in the Olympics will be given an opportunity to train as divers for the 2024 Olympic Games in Paris, France.

The boys, who live in Port Royal in East Kingston, have been swimming since they were as young as four years old. They revealed their Olympic dream in a recent Gleaner article, where they boasted about their raw talent.

Jamaica Olympic Association (JOA) President Christopher Samuda has been impressed by their talent and paid them a visit in the historic town on Sunday.

“What I like about them is the enthusiasm, the fearlessness, too, and that is something that you have to have in diving; you have to overcome that fear. They have this fearlessness. They want to succeed, and they want to dive, which is perhaps the most important thing – they love to dive,” he said.

The group of 10 boys, ranging from age 14 to 19 years old, will next form a club and will be evaluated and then become exposed to professional training.

“Yes, they have talent, but what we are going to have to do now is to hone that talent to an international standard, so we are going to have to bring in the coaches to see to that and then to ensure that we have a cadre of young gentleman who are very serious because as I indicated to them, once we put them in that programme, unless there is some very good reason, I expect them to continue in the programme,” Samuda said.

The JOA president is confident that they will make it to Paris if they remain committed, but outside of the Olympics, he noted that there are several other regional and international competitions they can enter. It is a bonus that some of them are relatively young.

Yona Knight-Wisdom made sporting history in 2016 when he became the first Jamaican male athlete to participate in an Olympic diving competition. Knight-Wisdom was born in Leeds, England, to a Jamaican father and Barbadian mother and began diving in 2004 after being spotted by a talent scout. After failing to make it on the British team, he decided to represent Jamaica at the Rio Olympics. He became the first male Olympic diver competing from a Caribbean island.

Samuda said that he is hoping champions can be found among the new recruits, but this will take substantive investment. This involves getting them coaches, proper gear, and identifying facilities of international standards for training.

“One of the things that I have always said is that we need to expand the pool of our talent, and there is so much talent in Jamaica, a wealth of talent outside of Kingston that we can tap in to and can make of that talent, Olympians and champions,” he said.

Samuda has kick-started an Operation Olympiad initiative aimed at searching for new talent and exposing them to a proper structure and training. He said the federations under the JOA have been encouraged to assist in this endeavour.

Thadius Brown, one of the new recruits from Port Royal, said the initial meeting went great, and they are all anticipating further dialogue.

“They feel great and want to push forward for it,” he said of his friends The Jamaica Olympic Association (JOA) will be