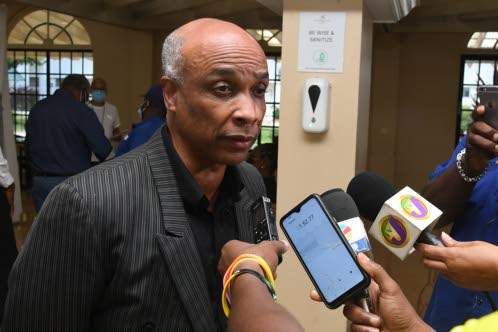 Still, the tiny island will be represented at six sporting disciplines at the delayed 2020 Tokyo Olympic Games — athletics, boxing, swimming, diving, gymnastics and judo — the most at any of the 18 editions of the summer Olympics it has participated in.

The record was five, achieved in 1972 (athletics, cycling, diving, sailing and swimming) and 1984 (athletics, boxing, cycling, swimming and weightlifting).

Jamaica, through 26-year-old Ebony Drysdale-Daley, will be making its first appearance in the discipline of judo, while Ricardo “Big12” Brown, the super heavyweight, gives Jamaica representation in the pugilistic sports for the first time since the 1996 Atlanta Games.

The JOA had targeted 10 sporting events for the Games, which was originally due to be held in 2020 but was pushed to this year due to the novel coronavirus pandemic.

“The 10-in-20 campaign was on in earnest but then came the pandemic which resulted in cancellations of qualifying intra and extra-regional tournaments which in and of themselves placed small nations, such as Jamaica, at a distinct disadvantage, as athletes from continental territories were able to access more rescheduled competitions, particularly in the combat sports in their neck of the woods, gaining points thereby improving their ranking,” Samuda posited to the Jamaica Observer.

He added: “Injury, in addition, ruled out our skateboarder who was vying for a historic berth for the sport and who, in the absence of the pandemic, would have been competitive.”

The Samuda-led JOA administration devised an ambitious programme aimed at increasing Jamaica’s participation in other sporting disciplines at major regional, continental and global championships, and to a large extent, reaped tremendous successes. But the ultimate aim was for the 10-in-20 at Tokyo.

Still, he remains resolute that the JOA was on the right track, and the approach will be similar to the 2024 Games in Paris.

“For the Paris 2024 Olympic Games we will stay the course by continuing to invest in the talent of our athletes and coaches for the historic results of the 2018 Gold Coast Commonwealth Games, the 2018 Central American and Caribbean Games and the 2019 Lima Pan American Games validate that approach.

“We will continue to resource those emerging sports and will encourage, across the board, the formation of Olympic squads as nurseries for tomorrow’s champions. We will encourage biennial national drafts for each sport as part of the infrastructure of sport and in expanding and deepening the pool of talent as we advance what I term as our ‘Sport for All, All for Sport’ Quadrennial Agenda.

“The talent net will be cast strategically wide and customised programmes will provide media for talent matriculation and transitioning to the international stage,” the JOA boss promised.

And Samuda, who was only recently returned as president for another term with a huge 40-10 victory over Allan Beckford, is convinced that success will be theirs in the end.

“I am of the view that the foregoing and the undoubted commitment of our member associations and federations will lay the foundation for 2024 Paris to be hailed as historic,” he ended.