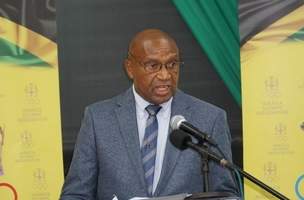 The newly introduced Jamaica Olympic Association (JOA) Jamaica Athletics Administrative Association (JAAA) Olympic Destiny Series has already had the huge capital injection it was designed to produce for local-based athletes who received over $1 million dollars in cash incentives on the first weekend of the three-meet series.

A total of $1,126,000 was earned by local athletes at the first staging of the JOA/JAAA Olympic Destiny Series at the National Stadium in Kingston on Saturday, May 22, 2021, after 18 athletes achieved or surpassed the performance standard of their events and were rewarded with monetary prizes.

Treasurer of the Jamaica Athletics Administrative Association (JAAA), Ludlow Watts, was happy for what took place over the first weekend and is looking forward to more benefits accruing to the athletes for the rest of the series.

“The athletes have benefited to a value of over $1 million on the first weekend and this was one of the main reasons for staging the series. We are quite happy that we are in a position to offer financial rewards to our local-based athletes and we are eternally grateful to the sponsors, especially the JOA (Jamaica Olympic Association) and the SDF (Sports Development Foundation), who have made it possible.

“We are looking forward to seeing more athletes benefitting financially from the series as we are sure that some of these funds will be used to aid their preparation ahead of the National Championships, which will be used to select the team to the Olympic Games in Tokyo, Japan.”

Two athletes met the required standard but were ineligible to collect any prize money as they are not Jamaicans.

Prize money is offered to the top six finishers in each event once they meet the performance standard. Each staging comprises a minimum of 14 events. Six events are designated as premium, four as classic and the others do not attract prize money. The events are reclassified weekly to maintain equity/benefits amongst the competing athletes.

First-place finishers in the premium events earn $100,000 while a first place in the classic events attracts $70,000.

Interestingly, the number of applicants increased significantly for the second meet which was staged at the National Stadium on Saturday, May 29, 2021 and details on the prize money awarded should be made available in the coming days.

While no spectators are allowed at the venue, the meet can be seen live on TVJSN and delayed on TVJ each Saturday.

The Olympic Games must go on - Samuda