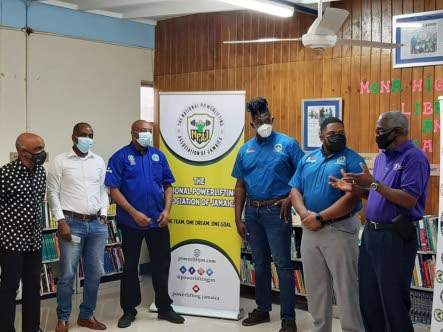 Athletics strongmen Fedrick Dacres and O’Dayne Richards have been named ambassadors of the National Powerlifting Association of Jamaica (NPAJ) and have vowed to lift the sport to unprecedented heights.

The 27-year-old Dacres, who won discus silver at the 2019 Qatar World Championships and gold at the 2018 Commonwealth Games in Australia, said it was an easy decision to join the NPAJ.

“For me to be a part of this, it was a no-brainer because I have been watching lifting from way back. I knew that there were strong people in this country, but I never knew of them,” said Dacres, who stands six feet, four inches and weighs 229 pounds.

“I want to use my name in track and field and get people to know, to get sponsors and get us to where we can be a part of the world’s strongest men and get Jamaica out there,” Dacres added.

Meanwhile, Richards, who got the bronze in the shot put at the 2015 World Championships and gold at the 2014 Commonwealth Games, said he was more than happy to be named brand ambassador.

“I would like to use this opportunity to encourage those of you who see this to look out for us,” said Richards.

“I know that all of us are delighted that this new organisation has started and I would like for us to take this opportunity and prepare ourselves for what is to come,” he stated.

“We all across the board as sportsmen and women have strength background indicative of whichever sport you play whether it’s table tennis or whatever and therefore because of that background you have partial membership to the NPAJ and I would like to encourage you guys to participate no matter your size or weight class,” Richards pointed out.

“I know my colleague Mr Dacres is very passionate about the strength sport and we will do our best and push the sport as far as we can and for those coming after us to carry on the mantle and put Jamaica on the map like other sports have done,” he added.

The NPAJ is the newest sporting body formed in Jamaica and President Michael Blair is hoping for the financial support that would make the discipline a success.

“We are hoping that 2022 will be a better year financially for us. We are doing well but the aim is to do much better to get powerlifting to wider Jamaica and that every little parish association can start their own powerlifting team so we can start our club championship,” said Blair.

One of the persons who can assist is Denzil Wilks, general manager of the Sports Development Foundation (SDF), and he noted that he was impressed with the young organisation.

“It is wonderful the energy that I have detected. The energy that has been on display since the establishment of the association is remarkable,” Wilks pointed out.

“When you start off so impressively you have to maintain that level of performance and I want to encourage you to continue and wake up some of the other sporting associations and the SDF is here to assist in the development of sport,” said Wilks.

“It is my absolute pleasure to be here on this occasion. The NPAJ as I understand is the youngest sporting body in Jamaica and I, therefore, want to take this opportunity to welcome you to the fraternity of sporting bodies,” he added.

The president of the Jamaica Olympic Association (JOA) Christopher Samuda was also on hand at the function at the Mona High School and he too was impressed with the powerlifting association. He offered his advice to the new organisation about developing and growing the sport in Jamaica.

Meanwhile, journalist Howard Walker was honoured with a certificate of appreciation by the powerlifting association for his level of assistance via his series of articles since its formation.