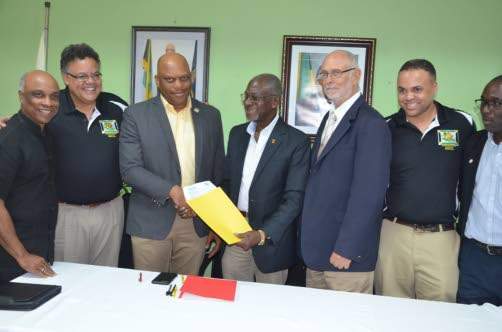 G C Foster College of Physical Education and Sport, the only one of its kind in the English-speaking Caribbean, has just added a course in the Fundamentals of Ice Hockey to its curriculum.

This follows the signing of a memorandum of understanding in January last year between the college and the Jamaican Olympic Ice Hockey Federation (JOIHF). The inaugural lecture took place on Thursday, March 18, 2021 and is slated to continue each week, embracing 12 weeks in this semester and approximately 24 weeks overall.

There has been tremendous enthusiasm for the course amongst the students and over 40 have registered for the classes which will cover a wide range of topics, including the practical aspects of playing ice hockey.

Material for the course, as well as some of the personnel to teach the course, has been made available through the International Ice Hockey Federation (IIHF), which conducts development courses of this kind in many hockey-playing countries and those like Jamaica keen on developing the sport.

JOIHF is affiliated with the IIHF and is a full member of the Jamaica Olympic Association (JOA). It plans to make extensive use of some of the current senior players to teach elements of the course, and the first lecture was handled by two of the members of the gold medal-winning LATAM Cup team. On March 18 the lecture was delivered by two presenters from the International Ice Hockey Federation.

The course is a pathway to the development of the grass roots programme for the sport in Jamaica, which is one of the two mandatory requirements for Jamaica to be able to participate in Olympic and international tournaments. In the absence of an ice rink at the moment, the course will eventually embrace instructions in the actual playing of roller hockey amongst the students and the launch of a roller hockey league, a precursor to getting local students of the game to learn to play on ice.

The second core requirement for participation in international and Olympic qualifying tournaments is the construction of an ice rink in Jamaica. JOIHF has a board member who is retired now after owning a specialty ice rink/arena business that was involved with designing, supplying, installing and servicing ice rink equipment for 24 years. He has been working with a top international architectural firm experienced in the design of ice hockey/multipurpose facilities and they have delivered preliminary drawings for the multipurpose rink that are now being examined for Jamaica. These plans were presented to Sports Minister Olivia Grange recently.

The Senior Jamaica ice hockey players are defending champions for the LATAM Cup, which is played for amongst countries in the Caribbean and Latin American region who do not currently have an ice rink.

In winning that tournament in 2019, on its first entry, Jamaica beat defending champions Colombia twice, Argentina, Mexico and Brazil, scoring 30 goals whilst conceding only six. The participation of Jamaica and its success in the tournament has significantly raised the excitement around, interest in and calibre of the LATAM Cup – and this year more than 30 teams have already signalled an interest in participating. The 2021 tournament is now scheduled for October 13 to 15 and plans are well under way to ensure the best-possible team is available for Jamaica to successfully defend the title.