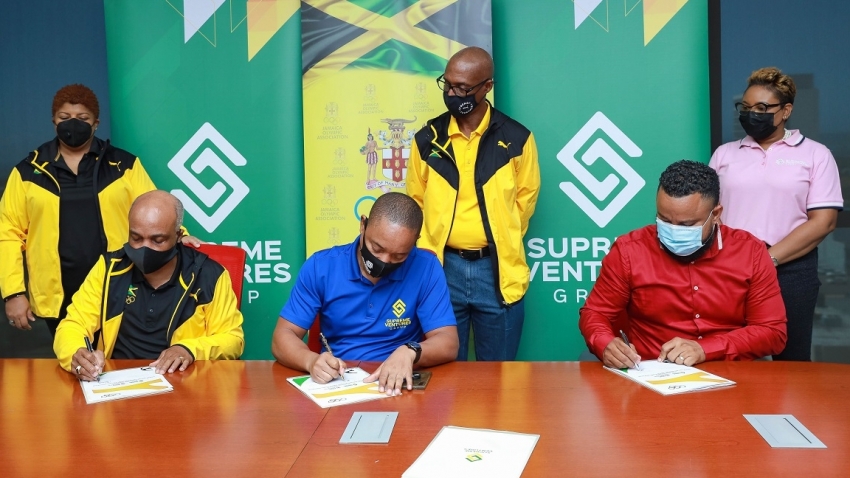 Ever since COVID-19 took real effect on the Jamaican landscape around March 2020, the local sporting fraternity has taken a battering, with the vast majority of disciplines forced off the playground and their architects, the sportsmen and sportswomen, unable to parade their skills.

With the Olympic Games on the horizon, this has meant a loss of playing opportunity for many who are hoping to get in tip-top shape and engage in competition to qualify for sports’ biggest spectacle.

For others, it is more than just being starved of competition but opportunities to earn and the benefit of communities from a social and economic standpoint in helping to curb violence and provide a source of income for many.

With the signage of a three-year JMD$45 million agreement between Supreme Ventures Limited (SVL) and the Jamaica Olympic Association (JOA), there is hope that such shortcomings will be rectified with an expanded return of sporting competition locally.

In making the announcement, Dennis Chung, CEO, Supreme Ventures Services Ltd., said: “We join hands once more with another major sporting organization, the JOA, so you can truly achieve our goal of becoming a launching pad that propels our local athletes even further.

“The partnership includes a 45-million-dollar investment to develop local sports over three years, commencing in April 2021,” he added.

Underlining sports’ social implications, Chung recorded satisfaction with the timing of this deal with the apex body for local sport.

He said: “I’m happy that this is happening because the truth is that sports are integral to the development, not only of the commercial part but the communities. I know that when we have had issues with violence in the past, one of the first things people always say is let us get sports in the communities and therefore it is important for us if we are going to develop not just in the sporting fraternity, but as a country that we are a part of this walk with the JOA.”

Chung further related the lack of sporting opportunity in Jamaica, while competition has long resumed in other jurisdictions globally.

“We are thankful that this agreement came to fruition in such a time of uncertainty and recognise the importance of uplifting our local stakeholders in the sports community because others globally have moved on and we have to do it also,” he urged.

“The sports industry, like many others, has experienced the negative impact of COVID-19 and more than ever require Jamaica’s support, both publicly and also in the private sector. With this agreement, we hope to aid in the promotion and progression of the Olympic Movement in Jamaica and we highly anticipate the chance to witness our athletes back in action,” said Chung, a former CEO of the Private Sector Organization of Jamaica (PSOJ).

Principals of the JOA, President Chris Samuda and Secretary General/CEO, Ryan Foster, highlighted aspects of their action plan in line with the ideals of Olympism.

Samuda challenged: “Speak to me, speak with me about the Olympic values and ideals that will characterize this partnership for the benefit of countless athletes and sports federations that will, through our Olympic Invest $40M program, give pursuits in sport hope to the hopeless, courage to the discouraged, faith to the faithless, dreams to the undreamt, credibility to the incredible, possibility to the impossibility, realism to the unreal and victory in conquering emotions of defeat.”

The JOA president also noted: “What Jamaica needs is a national business plan and strategies that are customized to the dynamics of the evolving global business of sport and safeguards of best practices and working concepts that understand the local sporting culture; a national corporate plan that integrates, beyond talk, sport with tourism, entertainment and environment and is executed by multi-skilled professionals whose work is governed by timelines, goalscoring GDP deliverables and whose performances are judged by the success of the outcomes.”

Foster reminded us that “the modern Olympic Movement, as we know it, was championed by a Frenchman who believed in the importance of sport in human development and the attainment of world peace. It was his view that success was not measured by winning, but by consistent effort and that when all else fails integrity should hold true.

“The Jamaica Olympic Association, through its board and corporate team, are firm believers in this way of life and seek through their activities to demonstrate this daily,” he added.

“Supreme Ventures will be partnering with the JOA in not only assisting with the development of sport through our member associations, but they will also engage the JOA in numerous activations that span not only the Olympic Games but also the other major Games under the JOA umbrella such as the CAC, PanAm and the Commonwealth Games,” Foster explained.

“With this investment of $45m, Supreme Ventures is now one of the largest corporate sponsors of the JOA and supports one of our strategic objectives to ascertain as least 50 per cent of our funding external to grant and solidarity funds.”

He added: “Supreme Ventures will also partner with the JOA in the continued expansion of our educational perspective, which is centred around education being the best possible pension plan for life after sport. Let us together live out the Olympic motto – faster, higher, stronger.”