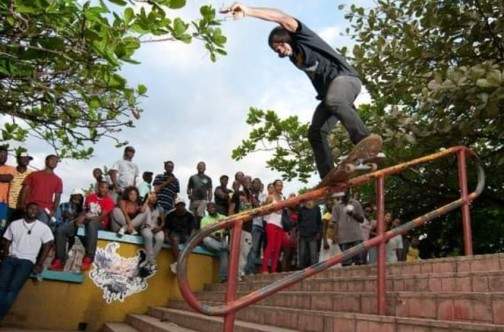 Top J’can skateboarder revels in success, wants to inspire others

Having had a taste of what can be achieved through skateboarding, local standout Mario Notice is hoping to not only take his career to the next level, but also to inspire others to take on the tricky trek.

Notice, like every other athlete, views the Olympic Games as the pinnacle of a lifetime’s worth of work, but beyond qualifying for the multi-sport showpiece, he is also seeking to broaden his scope in the sport.

Skateboarding was introduced as an Olympic event at the delayed 2020 Tokyo Games earlier this year.

Notice, who officially launched a career in the sport a few years ago, didn’t grow up training to compete at the Olympic Games or, by extension, to represent Jamaica any at all. Instead, he worked to improve his craft recreationally.

But, as fate would have it, Steve Douglas initiated the Jamaica Skateboard Federation (JSF) and advocated for the sport to be recognised as more than just a recreational activity, much to Notice’s delight.

“It’s funny how my love for skateboard came about. I was introduced to the sport by a relative who was visiting from the United States and after riding the board a few times, I instantly felt connected,” Notice told the Jamaica Observer.

“But I still didn’t think much of it, I was just having fun until I met Steve, who encouraged me to push myself to be a better skater,” he added.

So far, Notice has represented Jamaica in Brazil, Cayman Islands, and Barbados under the JSF and Jamaica Olympic Association (JOA) banners, strutting his stuff against some of the world’s best.

In fact, it was at the 2018 outing in Brazil that his true potential came to light when he upstaged top competitors with more experience in a street competition.

“Yeah, winning that event in Sao Paulo against 20 Brazilian standouts is still my biggest achievement to date, but the work continues.

“I am always eager to acknowledge that there is a lot of room for improvement because, to be honest, I am still learning and still growing with each flip and skip. So it has been a humble climb,” Notice noted.

At 32, Notice may be considered a bit on the older side for the sport, but if he is to learn anything from American legend Tony Hawk, who at over 50, continues to effortlessly hit some runs, it is that age is no barrier he cannot push past.

“First thing to consider mentally is that I am not skating for just myself. I skate to inspire others, so giving up is not an option and that’s why physical preparations are mostly focused around jogging and squats along with core workouts,” the Kingston College alum explained.

He continued, “I always remind myself not to be scared of being patient. I had an injury once that took me over a year before I could even get back on my board, and my mental strength was put to the ultimate test on that occasion.

“But like any other skateboarder I am aware that things don’t always go according to plan and you just have to be patient and trust the process.”

Though getting to Hawk’s level of success is no mean feat, Notice remains committed to continue flying Jamaica’s flag on the international stage alongside overseas-based Tafari Whitter and others.

“My aim is to still be that skater who gets you off your seats and on your boards just by seeing me skate.

“But, at the same time, my endeavor right now is also to travel to Canada and the United States to be certified as a skate coach and a skate judge and that is being supported and sponsored by the Jamaica Skateboard Federation and Skateboard Palace Limited,” he declared.

Notice says it’s now about “applying myself to gear and steer the future of skateboarding here on this land we love”.

“Representing Jamaica out there is a mission, and that’s the character and mindset I adopt when competing in places where people heard about Jamaicans but never see us in action. We are multi-talened people who can achieve whatever we set our minds to,” he ended.