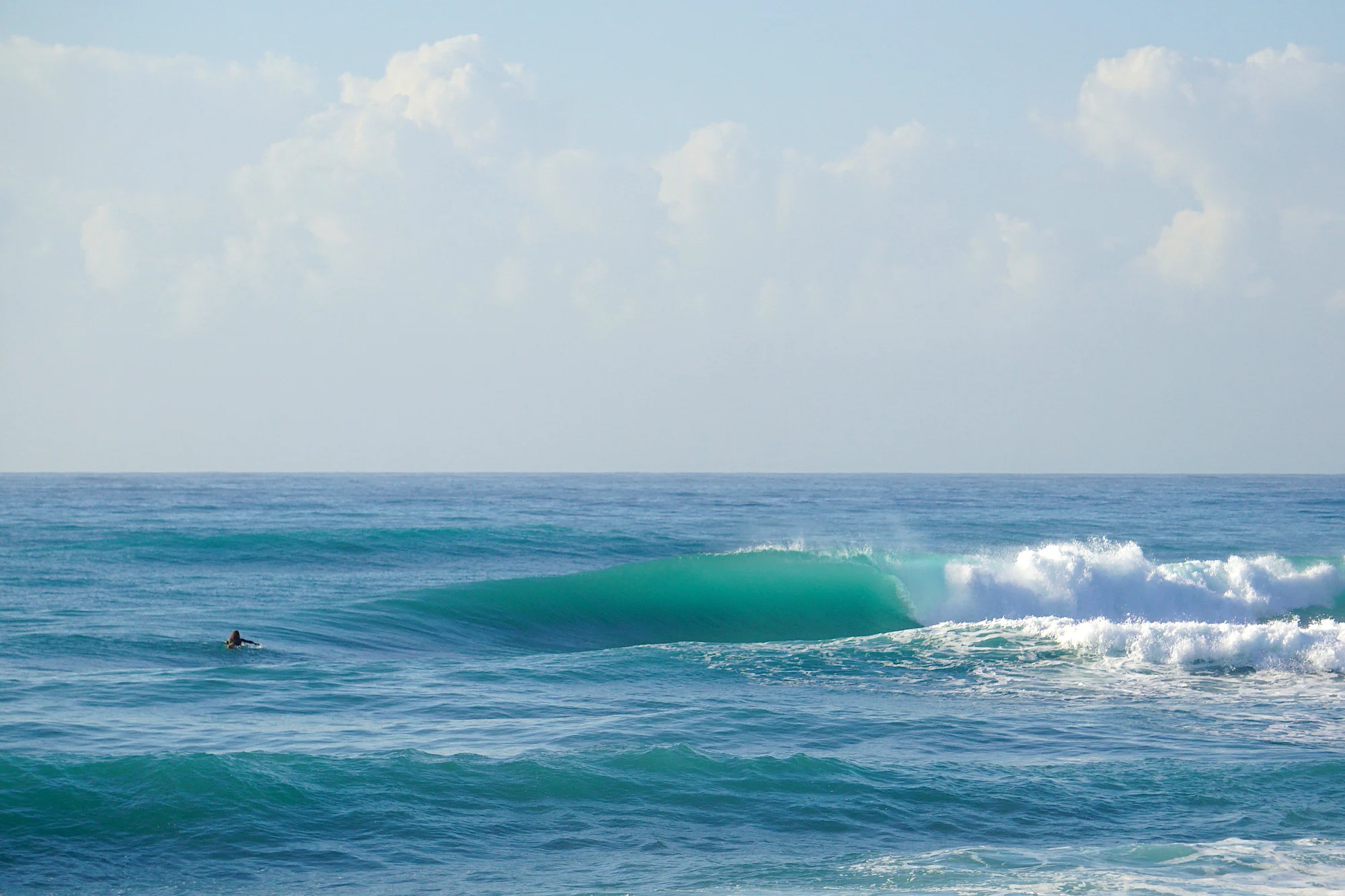 Existing on the outskirts of Kingston tucked into Bull Bay is a different kind of Jamaican paradise — far different than the over-sanitized, all-inclusive, get-your-hair-braided-but-don’t-go-outside-the-barbed-wire-compound, frozen drink resorts of the West Coast.

It’s called Jamnesia — an idyllic rootsy and charmingly ramshackle beach enclave that every wander-curious surfer in the hemisphere has read about. It’s the surf camp/music venue/homestead/skate spot established many years ago by the patriarch of Jamaican surfing, Billy Wilmot, aka, Billy Mystic, frontman of the internationally acclaimed reggae group, the Mystic Revealers. Wilmot not only created the Jamaican Surfing Association 20 years ago, but with his five children has created a welcoming spot that juxtaposes waves and authentic Jamaican tradition, drawing surfers from around the world.

But this collection of cottages may also be breeding potential Olympic athletes. According to former CT surfer-turned-full-time dream wave chaser Benny Bourgeois, the bwais and the gals ain’t just fussin’.

Bourgeois was part of the first group of pros to visit Jamaica in the late ‘90s with Surfer Magazine.

“Akeam Phillips is another standout from Jamaica — smooth and powerful,” says Benny B. Photo: Billy Wilmot

“We didn’t get the best waves but I just loved surfing with Billy Wilmot and his family on that first trip,” he recalls. “I was going back little by little, and in the winter of 2014, I just had one of those months. When the Caribbean is in a good pattern, Jamaica’s got a lot of waves.”

Out of friendship to Wilmot, Bourgeois jumped in to help coach the JSA and traveled with the Jamaicans to Peru for the Pan American Games in 2019.

“This is Runways,” says Benny B. “When the swell gets overhead and clean, this wave has similarities to Sunzal in El Salvador — so it was perfect for the team to get some time in out there. We surfed it four days in a row.” Photo: Billy Wilmot

For decades, there have been a few surf industry and International Surfing Association types pushing to get surfing into the Olympics. And for decades, the general consensus among everyone else was generally, “Yeah, who cares?” But with Surfing (capital ‘S’ now) now an official sport of the Games of the XXXII Olympiad alongside Golf, Sailing and Equestrian, the Jamaicans certainly care. The inclusion of a waveriding event to be held at Shida, outside of Tokyo this summer, means that the Jamaica Olympic Association will now financially support surfers in their quest to qualify.

“We get better funding to prepare and travel to the ISA Games, access to the official Olympic Support Team, and funding for training sessions,” says Icah Wilmot, one of Billy’s kids. “That allows us better preparation and time working with a coach than ever before. Being an Olympic sport, it offers a higher sense of purpose to the athletes aiming to represent the country at the highest level.”

“Icah Wilmot is the team Captain for sure,” says Ben. “He has the most experience in the contest scene and has competed in many ISA world games over the years.” Photo: Benny B

That means a more formal coaching situation with Bourgeois, who just returned from a few weeks of scoring and training with the team. He’ll travel with them to the ISA World Surfing Games in El Salvador this May.

“I’m working to get them a little more contest-ready,” says Ben. “Get them focused to make some heats in El Salvador. There aren’t many spots left, but this will be the last chance to qualify for the 2021 Olympics in Tokyo. There is an opportunity to qualify and they have a program now for surfing.”

Ben Bourgeois: “I believe this was day ten of my trip. We wanted to switch it up and hit the left points!” Photo: Billy Wilmot

Athletics are generally a huge priority for Jamaica, particularly the track events, where they took seven medals at the Summer Olympics 2016. “Ben’s last visit was a great stepping stone,” says Icah Wilmot. “Due to COVID restrictions and the uncertainty, we hadn’t had a face-to-face with him. This was overdue. We had pumping surf the whole time and trained in waves similar to what we’ll be on at the World Games.”

Reviewing the clips after a session is the new norm for anyone trying to improve their surfing. Photo: Billy Wilmot

Wilmot, 34, has been leaving his island to compete his whole adult life. A ten-time national champ, he’s made the finals of the East Coast Surfing Championships Junior Pro, placed 2nd and 3rd in the Independence Pro in Barbados through the years, made the Quarterfinals of the Outer Banks Pro and won the Makka Pro in Jamaica among an international field three different times. “He has the most international experience,” says Bourgeois. “He’s represented Jamaica around the world.”

Icah at Lighthouse, which is very similar to La Bocana in El Salvador. Photo: Benny B

Shama Beckford is tight with Wilmot. He’s a light-on-his-feet, stylish goofyfooter, and Hurley kept him on their roster through their recent transition. “You also have Garren Pryce, who just got married and is living in Denmark, but he’s won the JSA and he’s definitely one of Jamaica’s top surfers,” says Bourgeois. “Then you have Ackeam Phillips and Elim Beckford, who’s Shama’s sister. We haven’t finalized the team yet that’s going. It basically comes down to budget, how much funds we can get together. Even though the Olympic Association is funding the team, it’s quite the journey for Team Jamaica.”

Shama Beckford: “Can’t wait to see this guy light up the lefts of La Bocana,” says Benny B. Photo: Benny B

There are a few other women around Bull Bay who have made surfing a part of their lifestyles, and behind them is a new crop of girls being brought along. “Imani Wilmot (Billy’s daughter) is doing the surf coaching and guiding all the little girls coming up,” says Ben.

Additionally, there’s a Kingston crew that come down to shred at Jamnesia, and a Boston Bay shredder contingent on the North Coast. “The hardest part for the squad, in my eyes, is getting into the mindset to compete,” explains Icah. “Locally, the mood in the water is always laid back, Island time. Now we have to focus on surfing with a specific judging criteria. The surfers on the squad all surf amazing. But we have to just get their heads in the right place of managing heats to really make our mark.”

Ivah Wilmot is the youngest of the Wilmot boys. He doesn’t compete, but it’s great having him in the water pushing the team. Photo: Benny B

Even among the most promising, Jamaican surfing isn’t quite at the exercise ball and plyometric work-out phase yet. “They’re aware of how hard everyone else is working heading into the World Games,” explains Bourgeois. “And that’s where I come in, with the training and the coaching, to motivate them and give them a heads up as to where they need to be.”

Jamaican surfer David Lee holds some world freediving records and has the crew on a fitness program. They will also be sending Bourgeois clips and meeting online. Ben hopes to get back one more time before the World Games for a tune-up. And Jamnesia, which continues to grow in scope, isn’t just fostering competitive surfing. Ever involved in the community, they are providing structure for local kids through surf, skate, music and education. Jamnesia fosters the local music scene. The camp has a house band and international artists come to play and shoot videos. Academics have become even more dire since the pandemic closed schools a year ago. With many families not enjoying the luxuries of internet access, education for much of the public has come to a halt.

“I couldn’t believe the run of waves we got while I was there,” said Benny B.  “14 days straight!” Photo: Billy Wilmot

“They’re getting them active every day, surfing,” says Ben. “There’s a new skatepark, so they’re getting them skating. They have a really good program for the kids that are a little less fortunate. They have some tablets. They give them some studies. They’re full speed ahead with the younger kids, while I’m working with the older kids who have blossomed into good surfers.”

Any Jamaican hoping to don a jersey in the Olympics, even in 2024, has a bigger hill to climb than an American, Australian or even Brazilian ripper at this point. “Just getting over to compete is a huge accomplishment, being able to represent their country. Heats made it even better,” says Bourgeois in a serious tone. “But it’s doable. It’s out there for them to grab.” 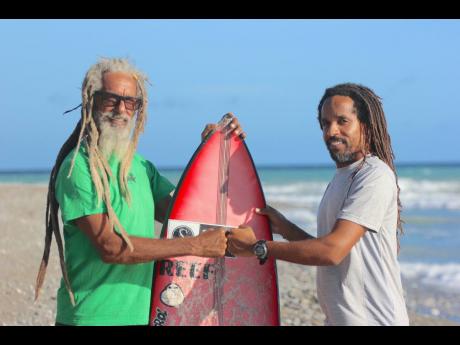 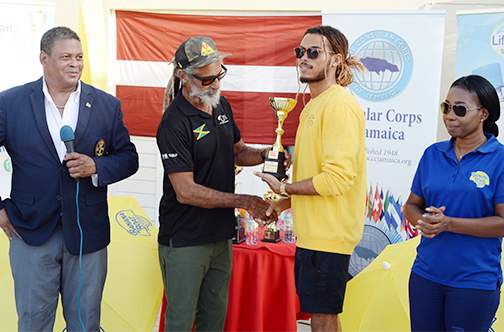 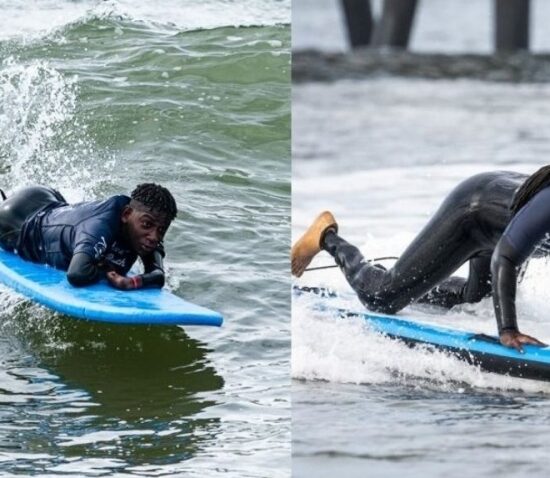 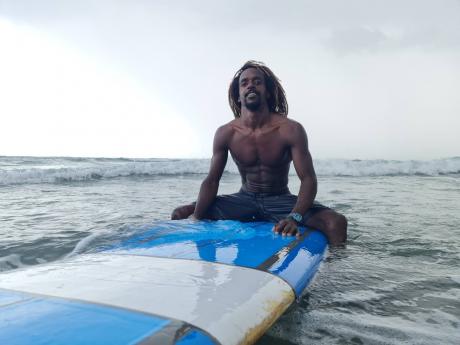