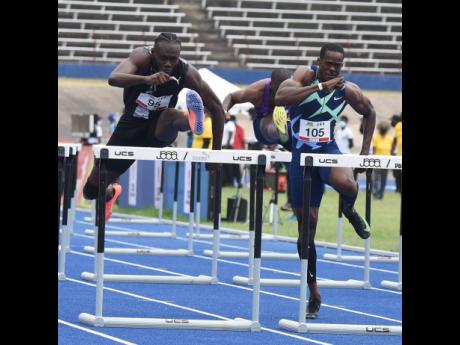 Sprint hurdler Rasheed Broadbell and schoolboy sprinter Sachin Dennis were among the most impressive competitors on a day that saw several strong performances, as local athletes geared up for next month’s National Senior Championships at yesterday’s series-opening JOA/JAAA Olympic Destiny Meet inside the National Stadium.

The meet, which offers cash incentives to Jamaican athletes who meet certain performance marks at the event, saw Broadbell, who a few weeks ago blasted to a then personal best of 13.15 seconds to win the men’s 110m hurdles at a JAAA qualifying meet, showed that this was no fluke, as he romped to a 13.10 seconds clocking to secure a win and become the fastest Jamaican in the event so far this season.

His time puts him ahead of Olympic champion Omar McLeod, who has so far registered a best of 13.11 seconds this season.

Broadbell’s 13.10 also put him at number two on the World Athletics Top List behind the United States’ Grant Halloway’s 13.07 seconds.

Fresh off his Class One 100 metres victory at the recent ISSA/GraceKennedy Boys and Girls’ Athletics Championships, 19-year-old St Elizabeth Technical sprinter, Dennis, outperformed the seniors to register a new personal best of 10.15 seconds to win his heat and top the field in the event.

His former high school teammate, Nigel Ellis, who now trains at the MVP Track Club, won his heat in 10.25 seconds for second overall, while Oshane Bailey of Sprintec finished third in 10.35 seconds.

Jazeel Murphy, who was second behind Dennis in 10.35 seconds in his heat, ended fourth overall. His time was his fastest since June 2013.

Tyquendo Tracey and Demish Gaye also had good wins on the track among males.

Tracey, who recently returned to Jamaica and is now being coached by Okeile Stewart, captured the 200 metres in 20.47 seconds with Sprintec’s Canadian sprinter Brendon Rodney, 20.51, Romario Williams, 20.55, running second and third, respectively.

Gaye, who was competing in his first 400 metres of the season, topped the field in the event, with the Sprintec man clocking 45.84 seconds. National record holder Rusheen McDonald, 46.06, of MVP, and GC Foster College’s Akani Slater, 46.15, had the next best times. Jaheel Hyde, who specialises in the 400m hurdles, was fourth fastest in a personal best 46.23 seconds in what was his first race of the season.

Shimarya Williams and Candice McLeod stole the show among the females with personal best times in their events.

Game-changing' drug tests to be trialled at Olympics — WADA