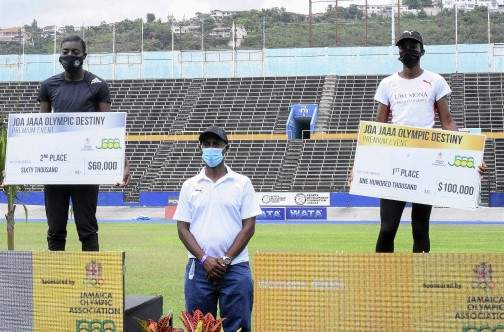 The highly anticipated Jamaica Olympic Association (JOA)/Jamaica Athletics Administrative Association (JAAA) Olympic Destiny Series got going on Saturday with a number of good, if not exceptional, performances that would have given fans of Jamaica’s track and field something to smile about, especially with the National Championships scheduled for next month.

The meet, which offers prize money for specific events, was compact and efficiently run, leaving the athletes satisfied for the most part.

Garth Gayle, president of the JAAA, was pleased with the first of the three meets in the series, while admitting there were areas to look at before the next staging this Saturday.

“We are pleased. The execution went very well in most areas. There are a few areas that need some tidying up. We are going to be doing the evaluation in the coming week but we are going to get better for the next staging,” Gayle said.

“Young Sachin Dennis, just coming off the exploits of Championships, to out-speed all the senior athletes in the men’s 100m, that is a good sight.

“This is not something new, but it is good to see that our juniors are keeping apace with our senior men, especially in the 100m,” Gayle beamed.

The JAAA president was insistent that Jamaica needs to return to being dominant in the short sprint on the men’s side, after falling off in recent times.

“We have to get back to having athletes on the podium at the Olympics and other world events,” Gayle said.

Rasheed Broadbell ran a second personal best in the men’s 110m hurdles in recent weeks, becoming the fastest Jamaican this year, when he sped to 13.10 seconds. Gayle was on hand to see the MVP athlete achieve the feat on both occasions, reasoning that the series is set up to benefit athletes like him.

“He has been excelling week after week and the competition is doing him proud, and so we are happy to be able to provide this avenue for our athletes like Broadbell.”

Gayle also noted the continued improvement of Candice McLeod who has repeatedly run personal bests in the 400m since the start of the season.

“Also, the 400m women, that also was another fine performance. Candice is doing well and is improving every time she puts on her spikes and runs on the track,” he noted.

Gayle is certain that athletes who didn’t take part in this meet will be ready to go for the second meet in the three-part series.

“With all that has happened, all the other athletes who would have missed out, I am sure that they will not want to miss out [again].”

The second meet in the series takes place this Saturday starting at 8:15 am.