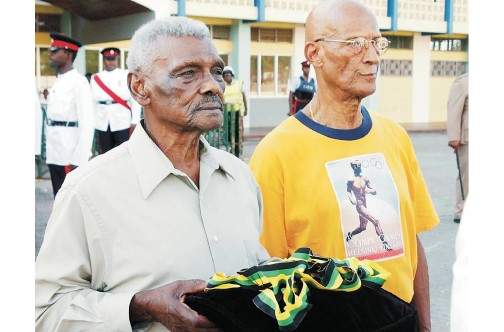 The Jamaica Olympic Association (JOA) says recently deceased 91-year-old Byron LaBeach, who was the alternate member of Jamaica’s 4X400 metres relay team that won the event at the 1952 Olympic Games in Helsinki, Finland, will always be remembered for the character that he infused in life.

LaBeach died in California in the United States on Sunday, December 12.

In a statement Wednesday, JOA President Christopher Samuda said: “I salute Byron LaBeach not only for his achievements in the athletic arena but also for the selfless spirit and valour he embodied which, for successive generations of athletes, should be an invaluable lesson in life in sport and beyond.”

He noted that the Olympic pin which he received officially in June 2019 was far “more than a symbolic act” as the conferment represented the soul of Olympism which he exemplified with ineffable humility.

“From early he was promising with good performances at Gaynstead private school from where he got a scholarship to St George’s College and later fulfilled his promise, representing Jamaica well.

“Deservedly, Byron LaBeach was among the first eight persons inducted into its Hall of Fame, by the then Jamaica Amateur Athletics Association (JAAA) and he also received an Olympic Pin from the Jamaica Olympic Association,” Grange said.

“My deepest sympathy to his three children and four grandchildren and to his friends and associates. Jamaican track and field has lost another of its stalwarts but Byron LaBeach played a long innings doing his best for his country. May his soul rest in peace,” the minister added.