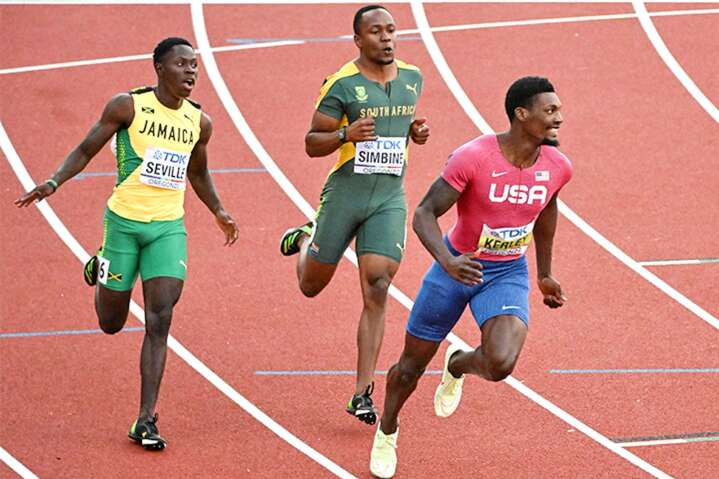 Seville, the lone Jamaican in what was a stellar line-up for the final on Saturday, produced another sub-10 performance of 9.97 seconds, behind Americans Fred Kerley (9.86s), Marvin Bracy (9.88s) and Trayvon Bromell (9.88s), who swept the top three places.

It is the first time the event is being hosted by the United States of America and it was indeed a very strong statement from their male athletes who had to play second fiddle to their Jamaican counterparts during the Usain Bolt era.

Still, the United States dominance is not expected to be similar to that enjoyed by Jamaica, as they are set for battle with the diminutive Seville who seems poised to take over the mantle and position left vacant by the legendary Bolt.

Former World Champion Yohan Blake, who has been dogged by injuries for years, has failed to make it back to the giddy heights that saw him crowned world best in 2011.

His bid for a second world title ended in the semi-finals, where he took fourth place in 10.12s, and at 32 years old Blake is certainly believed to be closer to retirement than making it back to the top of the podium.

However, the performances from Seville this season have been pleasing the heart of Jamaica’s track and field fans, among them the JOA president who hailed the 21-year-old on his debut showing at the championship.

“Oblique demonstrated mettle and character as he carried on his shoulders, in the final of the 100m, the hope of a nation — and he did not disappoint,” he said.

Samuda also suggested that Seville, a former Calabar High School standout, is an inspiration to the next generation of male sprinters who are looking to make a breakthrough on the international stage.

“Oblique, in this edition of the World Athletics Championships in Eugene, Oregon, has given a generation of Jamaican youth in waiting for success, a lesson that you can achieve with courage, commitment and humility.

“The Jamaica Olympic Association celebrates with our Olympian, who we are confident has the credential to chart a course in sprinting that will place him firmly on the pages of history,” Samuda stated.

The JOA boss believes it is only a matter of time before Seville will stand atop the podium at a major global athletic event.

“The Olympic track and now the World Athletics Championship track, has the imprint of his spikes — and one day it will be golden,” Samuda said.

Seville will now turn his attention to the 4x100m relay, with hopes of securing a medal.