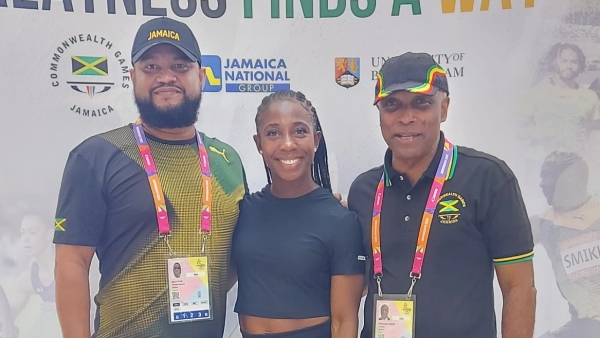 It was certainly a Wolmer’s reunion when Olympian Shelly-Ann Fraser-Pryce came to the JOA’s Commonwealth Manor at the very “vibes” Edgbaston Hotel and Conference Centre in Birmingham where the Commonwealth Games is taking place.

JOA President, Christopher Samuda, and JOA Secretary General/CEO, Ryan Foster, who both hail from the prominent Marescaux Road educational institution, Wolmer’s Boys’ School, welcomed their “sistren’ Shelly-Ann, who attended Wolmer’s Girls’ School, and was on a doctor’s visit to Birmingham.

The Commonwealth Manor in Birmingham is the second edition of the current administration of the JOA, the first having been held at the snazzy and popular Helm Bar in the Gold Coast, Australia, where the 2018 Games took place.

Shelly-Ann said “yes this is Wolmer’s” in an evident show of scholastic camaraderie as she identified with the governors of JOA.

Samuda, in embracing the collegiate and national spirit, stated: “We are Wolmerians, the maroon and gold champions, and black, green and gold patriots” while Foster, inspired by the enviable history of his alma mater, was moved to say “changemakers and innovators we are and servant leaders we will always be”