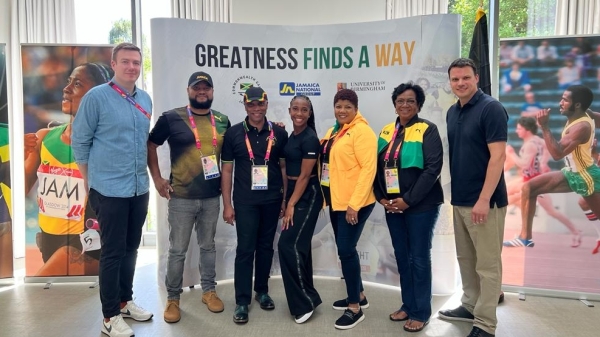 The BBC is a global name and the Jamaica Olympic Association is a household name and therefore it was natural for both to meet in Birmingham at the JOA’s Commonwealth Manor, being hosted by Jamaica’s apex governing body for Olympic and non-Olympic sports at the 2022 Commonwealth Games now underway in the city of Birmingham.

It was an amiable meeting with Olympian Shelly-Ann Fraser-Pryce who had lively exchanges with JOA Directors, Christopher Samuda, Ryan Foster, Jacqueline Cowan and Nichole Case and BBC producers who had a riveting conversation with Jamaica’s ‘Mummy Rocket” through the lens of the camera.

It was more than a “feel good” meeting as sport was on display uniting stakeholders who all share a common bond – “sport” – that impacts a global citizenry at play.

JOA Secretary General/CEO, Ryan Foster, said: “Sport is the winner here and if we all play by the rules the game of life would be inspiring and peaceful.”

It was a meeting of the minds and the natural beauty of the undulating green and flowered gardens of Edgbaston Hotel made it more tranquil. “This is sport and nature creating a conversation the value of which is priceless” JOA President, Christopher Samuda, said.