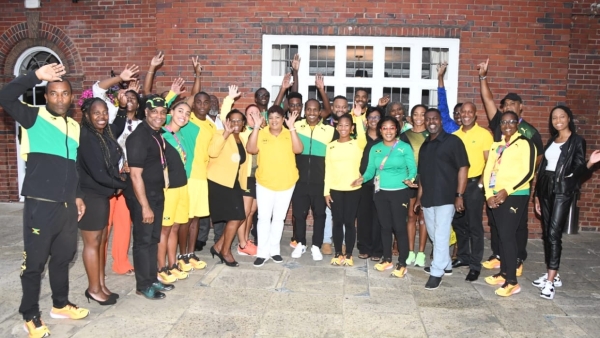 It is public knowledge that Jamaica’s prowess in the field events has become known on the global stage and the Jamaica Olympic Association (JOA) salutes our champions in the field who are toiling diligently and valiantly in making fertile the soil in sport.

The 2022 Birmingham Commonwealth Games is witnessing the continued growth and development of the field sports which augurs very well for the future.

JOA President, Christopher Samuda, in acknowledging the advancement of the field sports stated: “Shanieka Ricketts’ admirable performance in accomplishing that gold in the triple jump – her first major title – and in so doing writing her name indelibly in the history book of the Commonwealth Games demonstrates that our footprints go deep and are well established in the sand.”

Travis Smikle, a seasoned campaigner, hurled the discus in Birmingham in securing the bronze medal in the men’s event which is well decorated with Fedrick Dacres, our national record holder and former Olympic Solidarity Scholarship recipient, and Chad Wright. O’Dayne Richards, a JOA Scholarship awardee who placed sixth in the finals of the men’s shot put in Birmingham, is an experienced soldier with gold medals in his cabinet.

“We are proud of our women and men in the field events who continue to be an inspiration to generations of youth who aspire to emulate them and who the JOA salute with the greatest of respect” JOA Secretary General/CEO, Ryan Foster, said with evident pride.

The golden leap of Lamara Distin in the women’s high jump and the bronze achievement of Kimberly Williamson in that event are crowning moments for independence. “At a time when we are celebrating independence it is uplifting to know that landmark achievements in various sports are being established as we, in the JOA, pursue our mandate ‘sport for all, all for sport” Foster said.

Kimberly Williams, a celebrated medalist, and a Ackelia Smith, who leapt to a personal best at the games, both represented our nation well in the finals of the triple jump and “exemplify the character and mettle of our national ambassadors who are establishing milestones and creating legacies in sport” Samuda remarked.