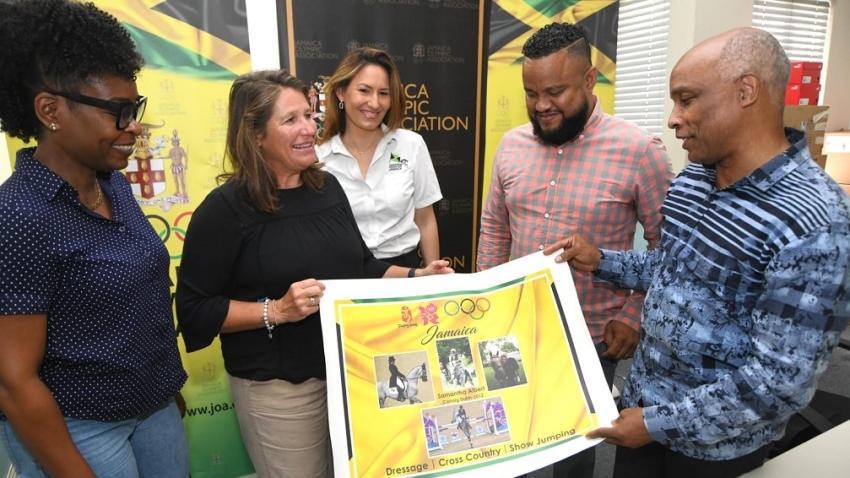 The Equestrian Federation of Jamaica (EFJ) expressed confidence in raising the level of its competitors to perform better in international competition, following the first instalment of an elite training programme hosted by the sports’ governing body here, the Jamaica Olympic Association (JOA).

Eight of Jamaica’s leading prospects in the sport, along with their horses, participated in the development programme that saw the JOA and EFJ partnering with Samantha Albert, who represented Jamaica in the equestrian discipline of Eventing at the Beijing 2008 and London 2012 Olympic Games.

Samantha currently resides in the UK and coaches young athletes for British Eventing, but jumped at the opportunity to run a series of training programmes to impart her knowledge and expertise and give back to local equestrians.

The primary target of the first JOA Elite Training series, which was held at the Kingston Polo Club recently involved developing and coaching a local talent squad in three disciplines – show jumping, dressage and cross-country.

“It’s a proud moment for me to see this partnership between a Jamaican Olympian, the JOA and equestrians. This is the beginning of structured local squad training and by offering this calibre of international expertise on the island we will raise the standard and work towards the bigger picture,” offered EFJ President, Heidi Lalor.

“While continuity remains key, the JOA Elite riders also gained invaluable knowledge to further progress themselves and their horses to achieve their goals,” Lalor added of the three-day exercise.

The course was open to eligible athletes of the national federation who have serious aspirations to train and compete for Jamaica and Novelette Harris, the JOA’s Member Relations Manager (with responsibility for education and training), reaffirmed the JOA’s goal to advance talent in all sports.

“The JOA remains committed to providing the necessary support and resources to actualize our mission to grow the sport and sporting talent across all disciplines within our membership,” Harris said.

“In this regard, we are pleased to have partnered with the Equestrian Federation of Jamaica in hosting this elite training programme for local equestrians and look forward to their continued advancement and development into an Olympic squad,” she added.

Riders were put through their paces with various training techniques, along with forward planning discussions offering personalised tactical advice and ‘homework’ for the riders and their horses. They had the added benefit of an international course on home soil with the purpose of further bridging the gap between national and international competition, and ultimately a Jamaican Olympic team.

Denise Cole Avril, one of the elite participants, said the programme was “very intensive and a great experience”.

“Samantha brought another eye to my training and allowed me to see some things that I may have been missing myself that automatically improved my riding skill,” she noted. “Our training with Samantha allowed me to explore my options with respect to competing at the regional and international levels and the qualifications, as well as the commitment to get there.

Continuing, Cole Avril added: “Samantha was very effective, knowledgeable and easy to work with. She was very open-minded and was happy to get our feedback throughout the process. The knowledge and experience that she brought to the table is not only something that our sport needs, but all sports. The support of having someone that has been through the ringer is invaluable. “Thank you to the Equestrian Federation of Jamaica and the Jamaica Olympic Association for this collaboration,” she said.

Lalor noted the combined efforts and its reflection in the show of commitment. “The riders, horses and coach Samantha Albert felt the benefits and saw results by the third day,” said Lalor. “This is a testament to the commitment and motivation displayed.”