JOA targets ’10 in 20′ despite coronavirus pandemic 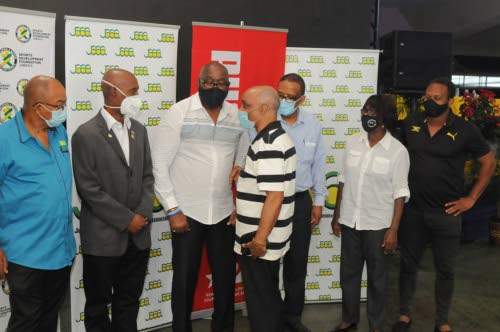 ROSE HALL, St James — Despite the major disruption caused by the novel coronavirus pandemic on the local sporting calendar, president of the Jamaica Olympic Association (JOA) Christopher Samuda is cautiously optimistic that Jamaica will still be able to qualify in 10 sporting disciplines for next year’s Olympics Games to be held in Tokyo, Japan.

The JOA had targeted 10 sporting events for the Games, which was originally due to be held this year but was forced to be pushed back a year to July-August 2021 due to the novel coronavirus pandemic that caused 1.5 million deaths and with almost 65 million infections globally as of Wednesday.

With sports gradually making a comeback, Samuda sent a message to athletes who were seeking to qualify in their respective sport “to get ready” and said they were still hoping to have representation in 10 sporting disciplines.

Under the theme ’10 in 20′, the JOA had targeted competition in track and field, gymnastics, swimming, diving, women’s football, rugby, skate boarding, rowing, karate, judo, taekwando, female cycling, wrestling and badminton. From that list, the governing body was hoping to have representation in at least 10.

In an interview with the Jamaica Observer on Wednesday after the media launch of the St James Parasports Federation at the HolidayInn SunSpree Hotel in Rose Hall, Samuda admitted that the disruption caused by COVID-19 had severely set back the qualifying process of a number of individual athletes and teams.

“As the apex body, what we have telegraphed to our respective member associations is get ready, have your athletes conditioned. We note the challenges in terms of COVID which has disrupted training regimes, cancelled tournaments and cancelled meets, but the fact of the matter is that an adept soldier is always ready for combat and therefore we have said, ‘get ready’,” he said.

The JOA, Samuda said, was prepared to do its part in helping the athletes along the way

“We are there to assist in terms of funding to qualification tournaments and qualification events. There are challenges in relation to achieving that goal but we are very mindful of the challenges that have been presented with COVID-19 and, of course, the disruption of the training regime as athletes will now have to recondition their minds and bodies in order to ensure that they qualify – and that is going to be a Herculean task,” he said.