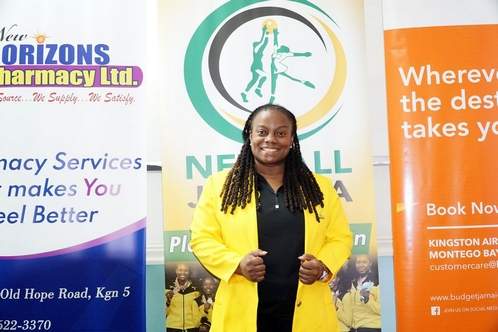 After almost two years without netball on the island, the sport returns with the three-match Sunshine Series between Jamaica and Trinidad and Tobago, with the addition of practice games against a Jamaica men’s team.

Speaking at the launch of the series at the offices of the Jamaica Olympic Association on Thursday, Netball Jamaica President Tricia Robinson said that everyone was happy that the sport was returning, even though South Africa withdrew from what was supposed to be a tri-nation series.

“The team is absolutely elated that with the return to playing netball we get to do it on home soil. We will be playing Trinidad and Tobago and an all-star male netball team.

“South Africa withdrew, however, we press on and we do believe as a unit that we will be getting excellent, fierce, tough competition from the male team,” she said.

The Jamaicans are ranked fourth in the world, while their Caribbean rivals are 10th.

Robinson said she expects a competitive series despite the gap between the teams in the global rankings.

“We are anticipating that Trinidad and Tobago will be coming here looking to close the gap in terms of the number of goals that Jamaica is expected to score against them.

“As the top team in the region, we are looking forward to playing them and to assist them in their game too.”
She admitted that it has not been easy for the series organisers, and thanked those who have partnered with Netball Jamaica.
“There is never, ever enough money to cover your expenses, any sporting association will tell you that, and so we always welcome funds to the organisations. It has been challenging putting the series together in terms of the pandemic, the ramifications, but we are doing it and I think we are doing well as a team.

“We are appreciative of all the sponsors that have come onboard, especially since we lost our two buses. We can’t say enough thanks to Budget [motor vehicle rental company] and the [Jamaica] Olympic Association for coming onboard and supporting us and to all the sponsors and there is always room for more,” she said.

Robinson said that the series will provide good preparation ahead of the series in England, which is to begin next month.
“We are utilising playing Trinidad and Tobago and the male team as competition going into England. The team is scheduled to leave on November 12th. We play a three-game series with them and so we are utilising this to select the team to England and to prepare the team for the Commonwealth Games.”

The Jamaicans are set to play Trinidad and Tobago today, and again on Tuesday, before closing out against the visitors on Wednesday. Their practice game against the men’s team is slated for next Friday, October 22.