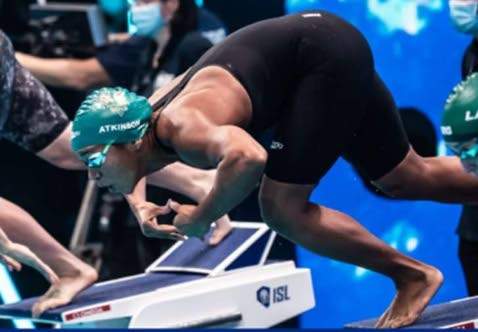 JAMAICA’S champion swimmer Alia Atkinson ended the third edition of the International Swimming League (ISL) on a high, copping one gold and two silver medals, as her London Roar team again placed third after the grand final in Eindhoven, Netherlands, on Saturday.

Atkinson, who was making her last appearance at the prestigious event, won the 50m breaststroke title but had to settle for the runner-up positions in the 100m breaststroke and 4x100m medley relay, though still earning valuable points for her team.

It was French-based Energy Standard who finished tops on 534 points to claim their second ISL title, after their inaugural triumph in 2019.

Atkinson literally saved the best for last, as she started the two-day final with a technically flawless breaststroke display on Friday, clocking 29.15secs, her fastest time of the season.

The Jamaican, who will officially retire after the FINA World Short-course Championships in Abu Dhabi, defeated American rival and the ISL record holder Lilly King (29.44secs) of Cali Condors and Italian Benedetta Pilato (29.56secs) of Energy Standard, who had relegated her to second position earlier in the season.

By virtue of her brisk winning time, Atkinson jackpotted two of her competitors in the process. Her world record for the event, 28.56secs, set in Budapest in 2018, remains intact.

The 32-year-old Atkinson then joined London Roar teammates Minna Atherton, Marie Wattel and Emma McKeon for the 4x100m medley relay where her breaststroke leg of 1:04.33 minutes assisted her team to silver in 3:48.45 minutes. They were just behind Energy Standard who won the event in 3:48.11 minutes, with Cali Condors (3:49.47) in third.

To say that Atkinson has been an awesome addition to the London Roar team for the past two seasons would be an understatement but, as is often said, all good things must eventually come to an end.

And with that in mind, the five-time Jamaican Olympian returned on Saturday to officially close the ISL chapter on what has been a remarkable career that includes four World Short-course titles, which she will be hoping to match in her final hurrah from December 16-21.

She signed off in the 100m breaststroke where she stopped the clock in 1:03.85 minutes for second behind King who won in 1:03.75 minutes.

King’s compatriot and Condor teammate Molly Hannis was some distance back in third in 1:05.01 minutes.

This season of the ISL journey has been a long and arduous but enjoyable one for all 10 teams and the over 200 swimmers from around the world who started from the regular season and play-offs, eventually advancing to the four-team final.