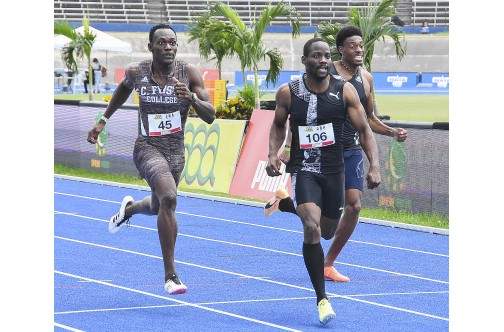 Rusheen McDonald won his first race of the 2021 track and field season when he took section one of two in the men’s 400m at the Jamaica Olympic Association (JOA)/Jamaica Athletics Administrative Association (JAAA) Olympic Destiny Series at the National Stadium in Kingston, last Saturday.

McDonald finished second overall with a time of 46.06 seconds, after Demish Gaye ran a faster time of 45.84 seconds in section two, to finish first overall.

The MVP athlete was happy with the win, but said he was heading back to the drawing board to fix the things he thinks are necessary to go even faster.

“It was okay for me. It was my first race. I have to thank God I finished the race, but I need to go back to the drawing board,” he said.

McDonald identified the end of his race as the area that needs work the most.

He also expressed confidence that he would be running much faster times next month, when making the team to the Olympic Games will be on the line.

“The time was okay. I am just going to work on it and prepare for Trials.”

McDonald is planning on using the other two races in the series to sharpen up ahead of Trials.

“I will use the other two races in the series to get better times,” he said.

The Jamaican Olympian is grateful for the series as he believes it will redound to the benefit of a lot of local-based athletes, who are unable to head to Europe for one reason or another.

“It is better for some people, because some people don’t have the status to go to the Diamond League, so it’s okay to run in Jamaica where they have competition [from athletes] like myself, Demish [Gaye] and other persons who can push them to a level, so that they get better,” he reasoned.

Always the team player in a sport known for its individualism, McDonald said that it was his habit to encourage everyone after a race.

“I always tell people congrats and stuff like that, when the race is finished.”

Race two in the series is this Saturday, starting at 8:15 am.