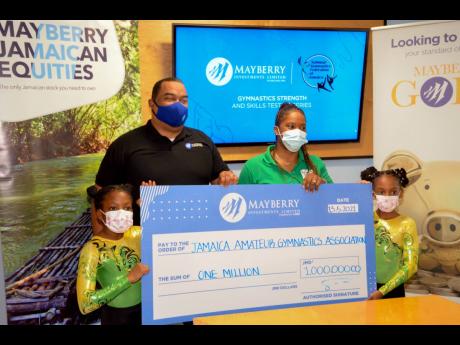 Mayberry Investments unveiled The Mayberry Gymnastics Strength and Skills Series inside its boardroom in Kingston recently.

Mayberry Investments Chief Executive Officer Gary Peart says that to see this event come to life is a fulfilling moment.

“We understand and we have seen first hand the positive impact of sport on Jamaica and the youth in particular,” he said. “The [COVID-19] pandemic has certainly hampered our ability to host sporting events and showcase true raw talent, but Mayberry is carving out a middle ground to do just that in the safest way possible, with the unwavering support of the Jamaica Olympic Association and Gymnastics Jamaica.”

The annual event was held at the Jamaica School of Gymnastics on Slipe Road, Kingston, last weekend and was aimed at testing the readiness of athletes against competitors internationally from ages five and up.

Peart says the event was used as a segue for gymnasts to perfect their skills and represent Jamaica at the highest level.

“Notably, this event is the first in a series to aid in the National Junior Development process and will continuously test the readiness of our athletes, as part of a four-year cycle, for the Olympic programme. In other words, this series is critical to the success and growth of our budding gymnasts,” he said.

The tournament hosted gymnasts from various clubs from Kingston, St Catherine, Montego Bay, Mandeville, and Westmoreland, as well as the Junior National Development team as one of the main competitors.

“We thank Mayberry for partnering with us to make this flagship event possible with some of the most promising gymnasts right across Jamaica,” Gymnastic Jamaica President Nicole Grant-Brown said. “This event marked the beginning of our Junior Olympics Programme and helped to strengthen the athletes over the next four events to reach their true potential and pinnacle.”

Money up for grabs at Olympic Destiny Series