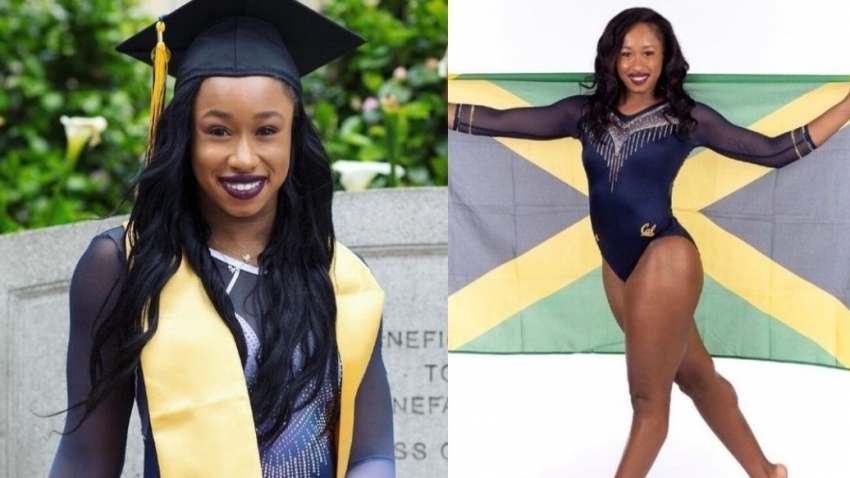 Jamaican Olympian Toni-Ann Williams is in Belgium to begin studies in Sports Administration on an Olympic Solidarity Scholarship via the Jamaica Olympic Association.

The 25-year-old Williams, who created history in 2016 when she became the first gymnast to represent Jamaica at an Olympic Games, made the announcement on her Instagram on Tuesday.

“Never thought I would be going back to school, but I’m excited to announce that this week I will be moving to Europe for the next two years to pursue a Master’s Degree in Sports Administration, Ethics and Integrity,” she said.

“Thank you @jamaicaolympic for this opportunity and thank you to all of my family and friends for being so supportive and encouraging.”

Over the next two years she will pursue her post-graduate degree at several schools in Europe; Ku Leuven in Belgium, Charles University in Prague, the University of Peloponnese in Greece, the University of Pompeu Fabra in Barcelona, Spain, and the Johannesburg Gutenberg-Universitat in Mainz, Germany.

According to JOA CEO and Secretary General Ryan Foster, earlier this year, the IOC, through its Olympic Solidarity Athlete Career Transition Programme, opened an offer to sponsor six former Olympians, globally, to pursue a two-year course of study in the Master of Arts degree in Sports Ethics and Integrity.

The purpose of the programme is to develop a professional approach to and establish Sports Ethics and Integrity as a new internationally recognized profession within the field of sports administration.

“Having learnt of the programme, the JOA decided to encourage and engage our members in March 2021, for those that would have qualified for such a programme as we saw it as an expansion of our Educational Perspective in developing the wholesome athlete,” he said.

“Three applications were received and submitted to the IOC.  The candidates were vetted and interviewed by the selection IOC panel and following this process, the JOA was advised that both Toni-Ann Williams and Megan Tapper were selected and awarded the scholarships.

Mrs Tapper, however, has subsequently deferred her start date.”

Olympic Solidarity will cover all expenses related to tuition, accommodation, travel and student allowances for the duration of the course.

A six-time All-American while attending the University of California, Williams told Sportsmax.TV that she jumped at the opportunity presented by the JOA.

“JOA reached out and let me know that the Olympic Solidarity was offering scholarships to past Olympians with a BA,” said Williams who graduated in 2019 with a Bachelor’s degree in Public Health. She said she opted for Sports Administration because she wanted to learn about the other side of sports.

“I want to switch gears in athletics from just being an athlete to understanding the administration part of the sports world,” said the gymnast who worked at a coach at Townes University last year.

Meanwhile, Foster said the JOA is pleased that two Jamaicans were selected and looks forward to the further contribution of Toni-Ann to sports as she joins a global cohort of students now seeking to pursue careers in sport integrity of governance.

“As she navigates the next two years, we remain supportive of her aspirations and indeed those of other athletes and coaches as we continue to seek out available opportunities for them both locally and internationally,” he said.

“Our recent internship and partnership with the Commonwealth Games Federation is another such opportunity that was created for our members, with Jamaica being the first Caribbean country to receive such an opportunity.”