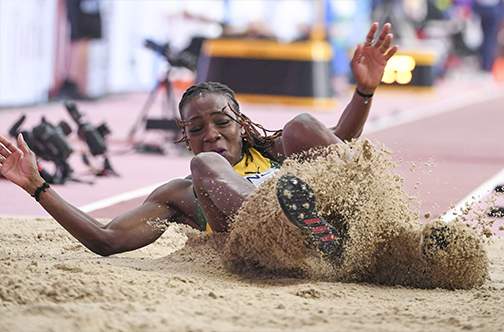 TRIPLE jumper Kimberly Williams was the only Jamaican winner at yesterday’s USATF Golden Games and Distance Open at Hilmer Lodge Stadium at Mt San Antonio College in Walnut, California, but it was two good runs in the women’s 100m by teen sensation Briana Williams that highlighted the Jamaican performances.

Her time in the heats places her fourth among Jamaican women so far this season, setting up what could be an explosive women’s 100m contest at the Jamaican National Championships set for next month.

The meet, which is the second stop on the World Athletics Continental Gold Tour, lived up to expectations with a number of world-leading performances and at least four national records.

The former National Collegiate Athletics Association champion who has a world-leading 10.72 seconds, the sixth fastest ever, also ran the 10th and 13th equal best times ever yesterday.

There were also world-leading performances from Americans Shamier Little in the women’s 400m hurdles and Rai Benjamin in the men’s equivalent.

Briana Williams, who had run sparingly so far this year, had a good day as she held on for third in the 100m final, with compatriot Veronica Campbell Brown placing fifth in 11.31 seconds after she had run 11.28 seconds (1.1) – her fastest time since 2017.

Campbell Brown, seeking her sixth Olympic berth, is now up to ninth on the list.

In the triple jump, Kimberly Williams’ 14.62m (1.4m/s) saw her move up to fourth on the world list, just a spot behind compatriot and former world leader Shanieka Ricketts (14.63m), both well over the Olympic qualifying mark of 14.32m.

Williams fouled her first two attempts before getting a legal mark of 14.38m (1.6m/s) in the third round to take over the lead which she held to the end of the competition.

Danniel Thomas-Dodd was second in the women’s shot put with a best of 18.91m, with Lloydricia Cameron throwing a personal best of 18.33m for sixth place and edging closer to the automatic qualifying mark of 18.50m.

Rajay Hamilton continues his relentless pursuit of the Olympic standard in the men’s 800m after he placed second in the B race in a new lifetime best of one minute 47.14 seconds.

Benjamin’s 47.13 seconds erased Edwin Moses’ stadium record and was the eighth best of all times while Mowatt’s training partner, Kyron McMaster broke the British Virgin Islands national record with 47.50 seconds for second place and Alison Dos Santos, who came into the meet as the world leader, set a new Brazilian national record 47.68 seconds.

Shiann Salmon was fifth in the women’s 400m hurdles race, running 56.28 seconds as the American Little clocked 53.65 seconds in her first race over the barriers this year as the previous world leader Gianna Woodruff was second in 54.70 seconds, a Panamanian national record.

Natoya Goule finished eighth in the women’s 1500m despite running a personal best 4:08.66 minutes, the fifth best of all time for a Jamaican, lowering her previous best of 4:14.56 seconds set in March at a meet in Florida.