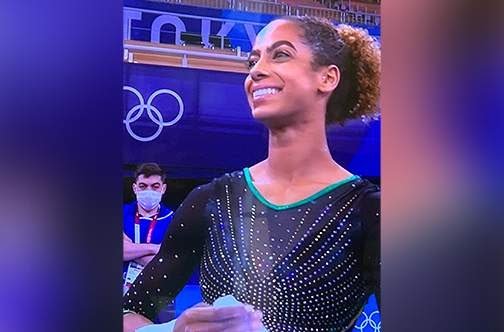 TOKYO, Japan – “The important thing in the Olympics is not winning, but taking part. The essential thing in life is not conquering, but fighting well.”

That’s a quote from Pierre de Coubertin, the founder of the modern Olympic Games, and for Jamaica’s artistic gymnast, Danusia Francis, it aptly describes her real life emotions at this very minute. 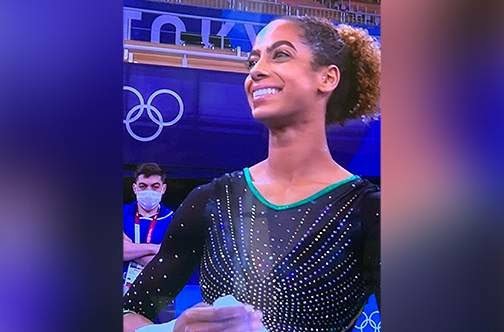 For it’s not often that one finishes last, but is perhaps the happiest person in the world at the end of competition.

That’s the reality of 27-year-old Francis, who until a few days ago, dreamt of competing in the all-round completion inside the Ariake Gymnasium Centre.

The British-born reserve on the 2012 London Games was never going to be a medal contender this time around, but she badly wanted the title of “Olympian”, a dream she had harboured for more than 20 years.

But two days before her competition, she received the horrible news that she had torn her anterior cruciate ligament in her left knee and so she decided she would withdraw from competition in the floor exercise, the vault, and the balance beam to alleviate the pressure on her leg and prevent further damage.

Francis was adamant that she would compete in the one event possible, the uneven bars, and do the best she could, simply to earn the tag of Olympian.

So yesterday, with a radiating smile and a bandaged left knee, she mounted the lower of the uneven bars, executed two toe-ons before gently dismounting. She was loudly cheered on by none other than perhaps the greatest to have ever performed the sport, American Simone Biles, then received a hug from Poland’s Gabriela Sasnal at the end of her truncated routine.

But that moment almost didn’t materialise, as it is understood that she met with the Jamaican medical team who advised her of the dangers of performing and that she would perform on her own volition. She also contacted her family, after which the brave decision was taken to be courageous and fight on.

And courage was what she displayed, as, at the end, Francis was as proud as a peacock to have simply competed at the Olympics, as much as Biles was to have swept numerous medals over the last couple of Olympic Games.

“It was a really special moment,” she said. “Not everything I dreamed of, but definitely a huge success for what I can manage,” she added.

Following her competition, Francis has been showered with messages of congratulations and courage from all over the world, and especially by her Team Jamaica teammates and management staff on social media.

At her event, Francis had actually apologised to the judges for not being able to compete at her best due to the nature of her injury. She scored a total of 3.033 points, after they deducted 6.5 points from her for various infractions and gave her a mere 0.5 points for difficulty, which placed her last, but the 9.033 execution score was the highest of the day on any apparatus, representing a significant show of willpower.

“Now that it’s over and I’m an Olympian, I’m just so proud to say those words, and just receiving so many messages of congratulations and support and just hearing how many people are proud of me had honestly just filled my heart with so much joy and I just feel so loved and proud that I was able to represent Jamaica,” she conceded to the Jamaica Obsever.

“I am disappointed not to have done the all-round mainly because of the hard work I’ve put in, and it’s got me where I’ve wanted to be all my life, so it wasn’t a waste and hopefully, there is going to be another time to show off all my hard work. So, for now, I’ll be excited that I’m an Olympian and not dwell on the negative.”

Francis says this particular experience was nothing she had envisaged.

“The experience of competing at the Olympics is not how I’d imagined it – didn’t imagine being injured, didn’t imagine having a pandemic -but the spirit of the Olympics was everything more than I ever dreamed of – the friendship, the respect, the unity, all of those feelings, and just walking around the village and talking to so many athletes and legends and being a part of Team Jamaica and bonding with Jamaican athletes, especially the girls in my apartment, I feel like we really created a great friendship, so I’m excited to see how they get on in their events and shout out to Alia [Atkinson], five-time Olympian who is a legend.”

Francis, as per competition rules, will be forced to leave the Athletes’ Village and Japan within 48 hours of the end of her competition, but not before she buys as much as she can at he merchandise store at the village.

“I’ve torn my ACL so it’s going to take a surgery to get it fixed, and obviously a lot of rehab, but I hope to be back in time for the Commonwealth Games,” concluded the woman who got the chance to realise her dream of competing at the Olympics and living in the Athletes’ Village among the legends of sports.