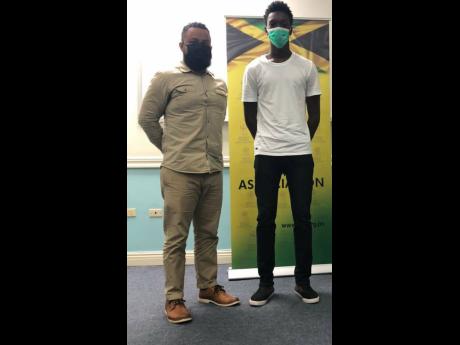 SKATEBOARDER JOEL Ricketts, who will make a historic appearance for Jamaica at the Junior Pan American Games in Cali, Colombia, which gets under way today, said that despite his inexperience, he would not be surprised if he takes home a medal. He begins competition today.

Ricketts, who just completed a three-week training stint in California, USA, said the camp helped him understand the difference between competitive and recreational skating, and he believes he is showing the mastery required in the various obstacles to claim a medal in Cali.

“I was there (California) for 24 days. I have definitely seen improvement in my skills and learning to approach skating from not just a hobby point of view, but from a competing point of view.

Ricketts admitted that there might be a gap between himself and the more experienced international skaters, but believes the practice he has been putting in will close any advantage other competitors might have on him.

“It (gap) is not that big, but that is why I practice. I wouldn’t have that experience, but I have better practice on different aspects and obstacles, so I wouldn’t think I’m too far behind,” he continued.

The 16-year-old Wolmerian trains up to six hours each day, practising one or two skills at most, and that, along with the work he does at Freedom Skate Park, which was established in Bull Bay last year, is helping him master the various skills.

Also, Ricketts admits to being totally committed to fine-tuning his preparation up to the 11th hour, and believes that it is what will enable him to do well.

“I will continue to practise with dedication and discipline, and I should continue to improve. The Games start today and it is all about doing more practice. Working on the little stuffs will enhance my preparations for the Games,” he said.

President of Skateboarding Jamaica Limited (SJL), Ryan Foster, said that he is proud of Ricketts’ historic achievement and underlined the role played by the Jamaica Olympic Association (JOA).

“Skateboarding Jamaica is extremely proud of this historic achievement of our athlete Joel Ricketts,” said Foster. “Through my office as president of SJL and through JOA we advocated to ensure that skateboarding is rightly represented at the Junior Panam Games for Jamaica.

“SJL believes that Joel, along with many of our other athletes, will continue to make Jamaica proud as we seek to diversify Jamaica’s representation in sport,” he added. “Skateboarding Jamaica is extremely happy of Joel progress and believes he will do the association proud.”

Ricketts meantime shared that he has been working hard to improve his craft.

“I practise six hours a day at different times, doing one or a couple tricks, and the skate park has definitely helped me getting my tricks secured,” said Ricketts.

“With the park, you can fine-tune your skills as there are many transition skills you learn by just flowing around the park. But without the park, you just tend to go back and forth.

“I believe it (performance) will come down to preparation and confidence, so I definitely expect to do well,” Ricketts said. “I don’t know who I will be competing against, but knowing my ability as a skater, I am going to do my best. And if I win anything I would not be surprised, because I know that I have been putting in the work.”