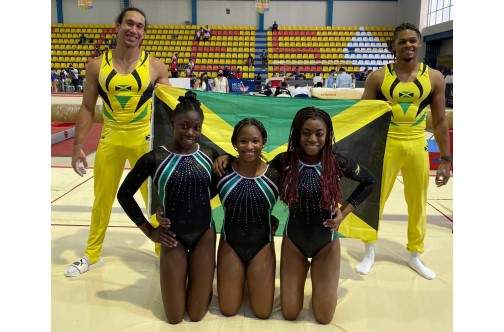 Having defied the odds against them to cop 13 medals at the recently concluded Central American Championships in El Salvador, Jamaica Gymnastic Association (JAGA) President Nicole Grant-Brown believes significant strides have been made in growing the sport.

For Grant-Brown, the fact that locally trained gymnasts, in particular, accounted for almost half of the country’s five gold, three silver and five bronze medals, speaks volumes of the progress.

“The Central American Championships was a huge success for us. We went into the championship with set goals in an effort to know where we are as we continue to develop as a sport and I am proud to say we have achieved the goals. So we are extremely proud and elated that at all the Jamaican competitors went and performed to the best of their abilities,” Grant-Brown told the Jamaica Observer.

Meanwhile, American-born senior gymnasts Caleb Faulkner with one gold and silver, and double gold medallist Michael Reid, accounted for the other individual medals, while the senior men and women teams both placed third.

“To say we are beaming with pride and joy, would be an understatement, especially with the achievement of our locally trained gymnasts who had to learn skills in four months that would normally take a year to perfect.

“We were up against limited time, limited resources and limited training due to the pandemic plus the lockdowns. Notwithstanding, this the girls did the best they could and we couldn’t ask for more,” Grant-Brown revealed.

“We are also super excited that our overseas-based gymnasts both juniors and seniors have kept up the hard work and have achieved gratifying results. Congrats to our two senior boys Caleb Faulkner and Michael Reid, who have did really well to win gold and silver and both senior teams, male and female on their third place finishes,” she added.

Still, Grant-Brown, who has been a tower of strength, particularly for her young local-based gymnasts, also praised those who just missed podium finishes, having watched them grow from strength-to-strength with each training session.

In fact, while some did not medal, their making the top 10 – which is a qualifying placement – in their respective competitions, ensured that Jamaica secured spots at the next Central American Championships.

Zuri Matandara-Clarke, Jeniah Chung, and Yasheeka Fernandez, all came in for commendation, along with overseas-based Dakota Lynch.

“Of the level two and three girls, Zuri Matandara-Clarke was the highest placed at fifth on beam. We can safely say that Jamaica’s locally trained gymnasts have taken a huge step forward to participate in a continental meet of this caliber,” Grant-Brown said.

“In fact, our aim going into this meet was to place in the top 10 and of the nine juniors, we had seven placing in the top 10 against countries in the region such as Guatemala, who basically won, El Salvador, Panama, Costa Rica and Nicaragua. This for us is huge achievement,” the president boasted.

“We must say a big thank you to the Sports Development Foundation, who helped to finance the accommodation. Thanks also to the Jamaica Olympic Association, the sports ministry and the ever-present and supportive parents for making this possible,” she ended.