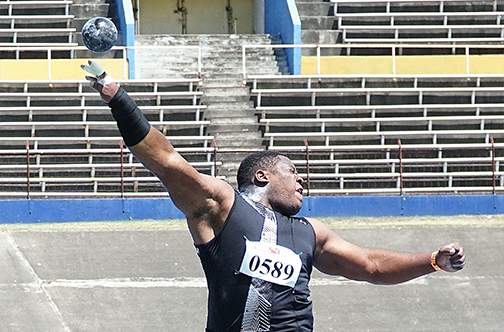 Richards, who was clearly in a good mood, began his sequence with 18.84m and got progressively better, throwing his season’s best effort on his sixth and final throw.

The 2015 World Championships bronze medallist was pleased with what he accomplished at the end of the day and is looking forward to more.

“Today [Saturday] was a good day for me – it’s a season’s best. I think I did fairly well with the execution, given the time of the year and where I am in training. For the coming weeks, hopefully, I will do better.”

Competing against only one other athlete meant that there was little rest time between throws, but Richards insisted that it was not a problem on the day.

“It didn’t really affect me today. I would have wanted more athletes here to compete with, but I understand the constraints. We are still in a pandemic and everybody has their different situations that they have to deal with.

“I am happy to be able to compete once more, happy for the season’s best. Hopefully, as I said before, I can do even better going forward.”

With the National Championships just under two months away, the 32-year-old is hoping to meet the Olympic Games qualification standards before that.

“I would like to hit 21.10m, which is the Olympic qualification mark, within the period. Hopefully I can do that before the National Trials and maybe replicate it at National Trials again.”

He admitted that a podium finish at the Tokyo Games is something he is looking forward to achieving later this year.

“It is always in the forefront of every athlete’s mind, however difficult it might be for the athlete.”

That apart, however, Richards is anticipating something special in his discipline this year.

“We have seen, in the past few years, the throws standards have gone up quite a bit and this year I think there might be another outdoor world record – and that is the standard that we have to compete with and we have to make the adjustment.”

Explaining further, Richards says that advanced coaching has led to athletes reaching even higher standards in the shot put and so the world record could be in danger in 2021.

“It is a tough field. A lot of the athletes are getting the information, the technology [that] a lot of the coaches have developed. The talents now have stepped forward and we are seeing a vast number of high-quality, elite of the elite coming out in the shot [put] and putting up big performances. So, to expect a world record would be common sense,” he said.

Richards has been the standard-bearer in the shot put for Jamaica for the past decade or so.