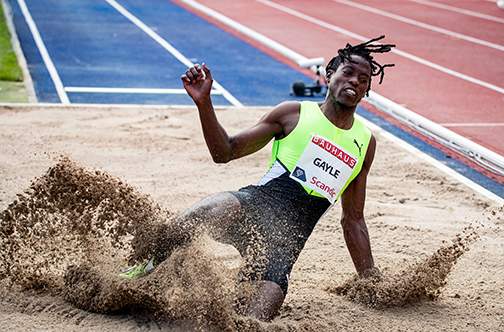 Gayle took full advantage of the format used in the Diamond League where the top three in field events after five rounds take part in a one-round winner-takes-all, while Jackson continued her hot sprint form from last weekend’s Jamaica Athletics Administrative Association’s (JAAA) National Senior Championships at the National Stadium.

Two other Jamaicans finished on the podium as Natoya Goule-Topping and Kemar Mowatt both lowered their season best marks in the women’s 800m and men’s 400m hurdles, respectively.

Gayle, who retained his national senior title at last weekend’s JAAA National Senior Championships, was second after the first five rounds with a season best equalling 8.27m (-2.0), but won in the ‘jump off’, beating Cuba’s Juan Miguel Echevarria who had jumped 8.29m (1.5m/s) with Sweden’s Thobias Montler third with a personal best 8.23m (1.4m/s).

Gayle was pleased with his performance. “Yeah, I’m very pleased and this was a reminder for the future that I can get into those regions, where I was and maybe even better.”

He also said he was confident as he looked forward to the remainder of the season. “I was always confident to be honest with you. I’m settled in the Europe circuit and have been travelling for three or four years now. I’m surprised I jumped that far because my feet have not really been responding and I was tired after the golden meet in Brussels. But I’m very, very pleased and very happy with the result.”

Eighteen-year-old Masilingi, who has produced a series of very fast 400m times this year, has been barred from competing in the one-lap event at the Olympics after World Athletics ruled last week that her testosterone levels were too high and above the level allowed for females to be allowed to contest that event.

The race was weakened earlier after American Sha’Carri Richardson withdrew after she accepted a one-month ban after she tested positive for cannabis during the US Olympic Trials, where she had won the 100m.

Goule-Topping lowered her season best for a second-straight week running one minute 56.44 seconds for second place in the women’s 800m, her second fastest time ever to move up to third in the world ranking.

Mowatt lowered his season’s best 48.75 seconds for third place in the men’s 400m hurdles that was won by Brazil’s Alison dos Santos, who lowered his national record for the second time in under a week and at least four times this season, running 47.34 seconds, while Turkey’s Yasmani Copello ran a season’s best 48.19 seconds to take the runner-up spot.

In the women’s 400m hurdles, Jamaican champion Janieve Russell was fourth in 54.08 seconds in a very fast race that saw the first three finishers dip under the 53.00 seconds barrier, setting personal best times.

Holland’s Femke Bol lowered her national record for the second time in a week, running 52.37 seconds which was also a Diamond League record, meet record and second best in the world this year as well as fourth best ever, pushing Jamaica’s Melaine Walker’s 52.42 seconds down to fifth all time.

Russell’s time was just one-hundredth of a second outside her season best set at the National Championships, while Leah Nugent was sixth in 55.01 seconds.