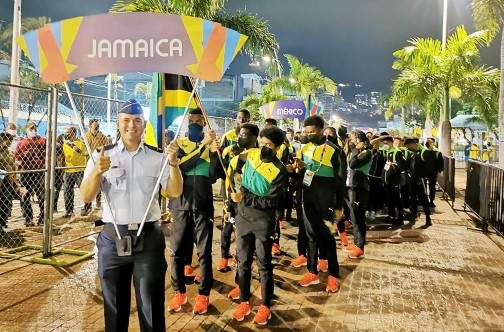 JAMAICA’S flag-bearers at the first-ever Junior Pan American Games, Brandon Sealey and Tahlia Richardson, have expressed a deep sense of pride and honour to be chosen for executing national rites at the event’s opening ceremony in Cali, Colombia.

Sealey, a member of the taekwondo group and Richardson, a member of Jamaica’s badminton team, will forever be remembered as the first athletes to carry the nation’s flag at the signal opening of the Games, which began last Thursday and runs through to this Sunday.

Commenting on his role Sealey expressed “gratitude” to sports’ apex body, the Jamaica Olympic Association, for extending the flag-bearing honour.

“I would like to extend my deepest gratitude to the Jamaica Olympic Association (JOA) for selecting me as the male flag-bearer for the first-ever Junior Pan American Games,” said Sealey.

“It’s such an honour to represent our country and wave our flag high for all the world to see,” he said of Thursday evening’s function.

Richardson shared similar sentiments, noting the “joy” of participating in the occasion.

“I am elated! Being able to represent Jamaica is one honour, to be the flag-bearer is an honour by itself which brings me great joy,” she said.

“I feel a great sense of achievement that I am given this mantle to carry,” Richardson added.

Sealey also represented Jamaica at the senior sporting championship of the Americas in Lima, Peru, nearly two years ago. He recalled that experience and called his flag-bearing duty in Colombia a “blessing”.

“It was such an amazing experience to march with my fellow athletes during the 2019 Lima Pan American Games, and to now be the flag-bearer for Cali 2021 is such a blessing,” said Sealey. “Thank you so much for this amazing opportunity, and I promise to make our country proud.”

“The JOA is elated to see the joy displayed by our two flag-bearers for the Junior Pan Am Games. We believe in showcasing Brand Jamaica, but also the diversity that we as Jamaicans have in sport,” said Foster.

“Congrats to Brandon and Thalia, and also to the taekwondo and badminton associations for the stellar work being done with their athletes,” he added. “These Games are the foundation for our ‘Sport for All’ quest for France 2024.