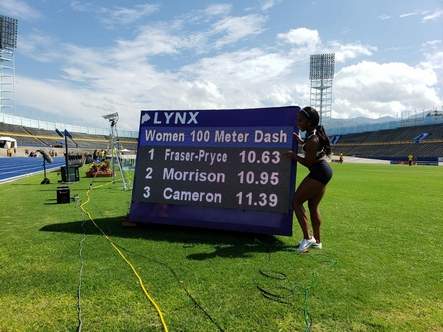 KINGSTON, Jamaica – Jamaica’s multiple World and Olympic Champion Shelly-Ann Fraser-Pryce ran a stunning 10.63 seconds (1.3m/s) in the 100 metre, to set a new national record and become the second fastest woman of all time at this morning’s third staging of the Jamaica Olympic Association/Jamaica Athletics Administrative Association Olympic Destiny Series at the national stadium in Kingston.

Fraser-Pryce who shared the national record with Elaine Thompson-Herah at 10.70 seconds and had a season’s best 10.84 seconds, moved past Americans Marion Jones-10.65 seconds and Carmelita Jeter- 10.64 seconds into second all-time behind world record holder, the late Florence Griffith-Joyner-10.49 seconds.

Fraser-Pryce was as stunned as anyone else who witnessed her blazing run saying afterwards, “honestly no I wasn’t coming out here to run that fast, thank God that I finish healthy.”

She said she was able to relax and run as “there was no pressure just wanted to get one more race in before the national trials.”

She did hint that she can run faster however, “If I am able to run 10.6 now and trials is some time away, this year I just wanted to break the 10.7 barrier so now I can focus on making the team to the Olympics.”